Strength Training: Male Dominated Since Ever!

1. For years, strength training has been a predominantly male dominant endeavor

3. Early intervention strength training creates more resilient bodies that can withstand the effects of pregnancy, delivery, and menopause better than their sedentary counter-parts. 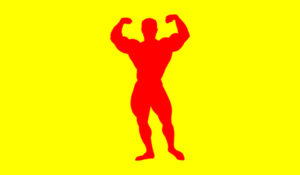 For years and years men have strength trained. It’s a right of passage for men into adulthood (totally kidding but for some, it’s far from a myth). We’ve been basing the size of our junk on how much we’ve benched since roughly the 1970s. So naturally, it’s more important for men to train than women right? Women don’t have to worry about having chiseled abs and scoring at the bar! Since those things are so important! Men need to strength train as a tool to maintain their strength so they triumph forward in the path to alpha male! Women do not have that pressure!

Well…the tide has shifted. Overtime we tend to listen to logic. And as we get older and wiser we realize the blatantly sexist & vain beliefs we have tend to steer our population in the wrong direction. Something amazing has been happening the past 10 or so years. More and more women are gravitating to strength training, not just for post-menopausal bone health reasons, but for recreation and sport. And as these women have moved on into their 30s and 40s it starts to draw a conclusion in my head and the head of others like me….Strength training is far more important for women than it is for men! And contrarian check for you dirt bags… that does not mean it is not important for men…let me explain.

Nope, just a keen observation. Women have more on the line. Let’s face it. Some species even kill off the male and eat them when they’re done reproducing with them like the black widow spider! So we as men should consider ourselves lucky! 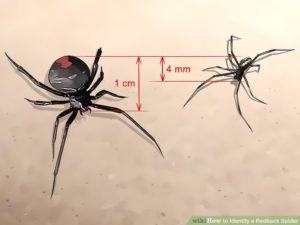 Can you guess which spider is the female and which one is the male?

My case for the ladies! Because at the end of the day… men do not bear young. And they do not have as many physiological issues with bone density, and other disorders that come with being sedentary!

Women and men have slightly different hormonal profiles… and I mean that with a hint of sarcasm. Because even the least hormonally active men will still carry more testosterone than women will. Men carry roughly 15-20 times MORE testosterone than women! And Testosterone is the primary hormone that builds muscle tissue. Women on the contrary have more hormones such as estrogen and progesterone. Estrogen specifically plays a major role in a lot of body functions other than just getting pregnant and maintaining a pregnancy. One of those is bone density. 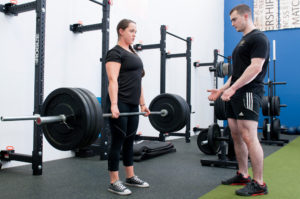 Women in the peak of their reproductive age do not need to worry too too much about their bone density. Pending that you do not have any disordered eating patterns, you could not workout a day in your adult life until around your 40s and you should be okay. I strongly advise against that. But you should be okay. Once you start hitting menopausal age is when things start to get funky.

When women hit the age of menopause it starts to become a progress report of what they spent the last 35 years of their adult life doing. If women did not spend it being active and eating a diet that faciliated a healthy lifestyle your luck may run out once you hit the age of menopause. Since you do not have the estrogen levels you had before your body will start to hemorrhage calcium from your bones. Calcium is needed for muscular contractions… it says “we do not need as much of this anymore… so let’s just use this!” Our bodies do not understand conservation unfortunately.

This is all theoretical. Because the human body does this if it has a need to. STRENGTH TRAINING preserves bone mass. If we are performing weight bearing exercise… why the hell would our bones leach calcium if it’s needed to support the added weight from this activity? We’ll get the calcium from elsewhere for the muscle contractions! It’s simple math… if you do not use it you lose it! And if you did not start in your young adult years it becomes incrementally more difficult to do so when you’re older. The literature is clear, the older we get, the more difficult it is for us to start a new habit. And the less likely we are to adhere to it even if we understand it’s importance!

In nature, our existence on this earth is simple. We are meant to reproduce. The mosquito that annoys the shit out of you at the BBQ you’re at has a burning desire as a species to reproduce. Just as we all do as humans. Even if you personally could care less about it!

Women’s pelvic floors are a little more volatile per se than a male’s. Both are responsible for urinating, defecating, and such. Which is a major role. But furthermore women have the tough task of actually carrying the child for 9 months. In that 9 months it goes from the head of a pin to a 6-9 lb baby! 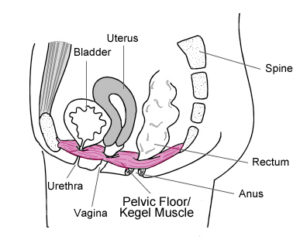 As this very PG rated diagram will show. This soft tissue is where the woman needs to literally carry the baby. The pelvic floor plays a huge role in maintaining its form during the 9 months. And of course we cannot possibly lay down on our backs for 9 straight months!

Strength Training by its very nature makes us better at creating tension, releasing tension, and bracing our cores depending on the bout of exercise we are performing. And if these muscles are not trained… what do you think will happen with them? We have less and less opportunities to challenge our muscular-skeletal systems these days. We are more sedentary than we’ve ever been. Manual labor jobs are becoming less and less frequent as automated machinery has been taking the place of human labor. So the chance is very high that your pelvic floor is not fully conditioned to handle a daunting task of successfully carrying a baby without substantial living modifications for a period of time. Since we as humans did not evolve from watching Net-Flix and chilling all day on Sundays!

Ease Of Third Trimester And Delivery 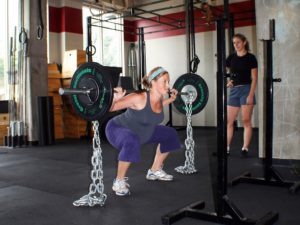 Thank you Crossfitthreshold.com for the photo! This woman is a bad ass!

Women who strength train time and time again are shown to have much easier pregnancies and bounce back faster. And they also rebound back to the body comp they were at faster when compared to sedentary women. It’s clear cut. You have trained yourself to with stand the effects from a pregnancy. So naturally you’ll be better conditioned for it. So in general, the whole term of “I’ve never been the same since my pregnancy” is much less likely to be a “thing” for women that engage in extensive strength training throughout their adult lives. Women that delve into it later… i.e. they start working out when they start looking to get pregnant or older, such as post menopausal, are behind the 8-Ball. This is something that should be done for years! This isn’t saying that women who were not consistent are doomed… millions of women do it every year. But like most preventative medicine, it MAY create a more stressful process. Willing to take your chances?

So many babies are born via C-Section. Which is when they cut through your abdominal wall in order to deliver the baby. This is commonly performed as a “safety precaution” and I can understand the parent’s need to keep the baby safe. But if the baby is not in danger, you should more than  likely deliver naturally. When cutting through the abdominal wall you are essentially severing one of the most important muscle groups in the human body. The anterior core. The rectus abdominus and transverse abdominus. 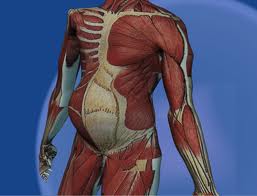 TVA is in white and RA is in Red

But, I get it. In times of giving birth, I’m sure the mother’s desire to keep the baby safe overrides their own future workout routines. That is how it should be! But just remember that if you do give birth via C-Section I would strongly recommend physical therapy soon after the birthing process. That way you can restore normal function of your anterior core.

In 2018 we have a wealth of knowledge out there these days regarding strength training and it’s effectiveness in maintaining strong muscles, bones, ligaments, and tendons. And the more clients I work with and see progress through their routines the more of a strong argument I have. Strength training for females far outweighs the benefits it gives men. Not to say men can’t substantially slow their aging process by staving off the crippling effects of “andropause” (lowering of primary male hormones like testosterone). I am saying that us men do not need to worry about bearing children and giving birth to them. And the days of women being perceived as “delicate” is a steaming bag of shit. And this notion is what holds back more women from be able to take strides in their personal fitness. 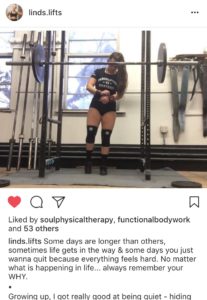 “Who me? Power lifting? That’s scary!”

Power lifting’s popularity rise has not been contributed to men. It’s been far more contributed to females. The rise in female participation is a testament to the benefits that everyone is seeing in this purely individual sport. I work with females who want to be strong, feel, and look better. They come in all shapes, sizes, and occupations. And the term “power-lift” should not scare you off. I use a template that keeps women motivated and hungry for more progress. All while preventing injuries and create a more confident version of yourself!

You do not need to compete to be a power lifter! Lets keep making history together!

"I came to Mike after a knee injury, post-surgery and having just completed physical therapy. The injury limited my mobility through the winter which made END_OF_DOCUMENT_TOKEN_TO_BE_REPLACED

In May of 2016, I began training with Mike D’Amico and it was truly a life altering experience. Mike put me through rigorous and challenging END_OF_DOCUMENT_TOKEN_TO_BE_REPLACED